| Who We Are: Ron Perry, Carolyn Leigh and Doug Mehaffey

Art-Pacific: Who We Are - Ron Perry, Carolyn Leigh and Doug Mehaffey

Our site is Art-Pacific because we travel, collect and trade tribal art primarily in countries that rim the Pacific Ocean including Papua New Guinea, Indonesia, Australia, New Zealand, China and Mexico. We could not do this without our many good friends, including anthropologist Doug Mehaffey. 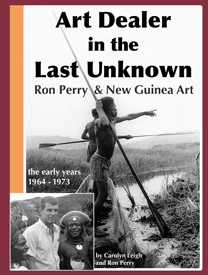 New Guinea Tribal Art eGuide by Carolyn Leigh with Ron Perry and Doug Mehaffey. Find out about your fabulous piece of New Guinea tribal art. The eGuide provides quick info about New Guinea art and art areas with links to more information. The eGuide contains over 130 photographs and 10 maps, plus adventure photos from Ron's explorations in New Guinea. Buy now from Amazon or from the Apple Store through iTunes for all your electronic book readers - only $3.99.

Exhibition calendar: buy direct from us during the Tucson Gem and Mineral Show at - New Guinea Tribal Art - more info