Karumosa, a Kula canoe from the Trobriand Islands 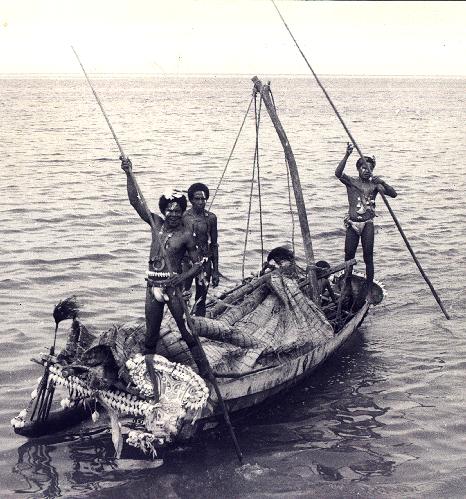 March 2, 2001:"Here are the original photographs of the Trobriand Island Canoe..... I hope you find them useful..... Also included is the text that I am almost certain was written by Morris Young. Warm regards, Thom Burns" (Peter Hallinan collected and documented this canoe, see 1.) Copyright Peter Hallinan/estate of Peter Hallinan, 2002. All rights reserved.

Karumosa, the catcher, is a Kula canoe of the Masawa type. This canoe was collected at Kadawaga village on Kaileuna Island in the Trobriand archipelago. These islands lie in the Solomon Sea off the southeast coast of Papua/New Guinea.

The men of the Kula came from the Trobriands, the Marshall Bennetts, Woodlarks, Laughlans, Louisiades, D'Entrecasteaux and parts of the Papuan coast. The Kula men of Kadawaga have their Kula partners in Kiriwina and in the Amphletts at Gumasila. They sail to Kula at Gumasila via Kiriwina and Vakuta, a distance of some 66 nautical miles.

The main physical manifestation of the Kula is the large sea going canoe that is made for Kula partners to carry on their exchange of wealth items. These are richly carved and decorated with cowry shells, feathers, flowers and streamers for Kula expeditions.

Men of the Kula lavish a great deal of their time building canoes and canoe houses. The canoes themselves require constant attention in painting, caulking and protection from the sun. Many of these tasks are shared with other members of the community and payment for the work is made by feasts and gifts of food.

Before a man even cuts a tree for a canoe, he first plants an extensive garden to meet his obligations to those who will help him. Progress on the canoe work is interspersed with feasting, betel nut chewing and socializing. This work can take place in fits and starts according to the industry of the individuals, gardening cycles, etc.

Many canoes finish their useful lives without having been finished in some respect. The canoe Karumosa was cut in 1932, but a medical who was stationed in Kadawaga reports that it was still being added to in 1954. Taunisala, the owner, plans to make a new canoe for Kula when he returns to his island. It is a big decision to sell a Kula canoe, but already he has laid his plans to make a bigger one more suited to the seas around his Kula destination Gumasila. 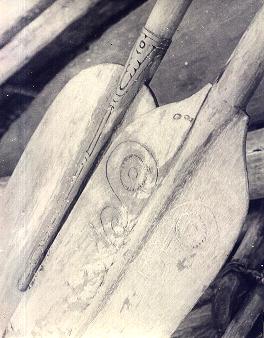 The Masawa canoe is basically designed for sailing from point to point. Its rigging is cumbersome for any other purpose, as it can neither come about nor tack.

Therefore, Kula expeditions are timed to sail with the wind. Once having reached their destination, the rigging is shifted from one end of the canoe to the other for the return voyage. If there is no change in wind direction, paddles often have to be used.

This year a Kula canoe returning from Kiriwina to Kitava overshot the island in the night. A strong wind drove the canoe north through the night, leaving it becalmed in the Solomon Sea. It took the men about ten days paddling before they reached Pomio on the New Britain coast. Such failures in navigation are held up to ridicule and are infrequent. 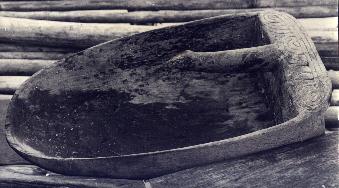 The canoe Karumosa comes equipped with two bailers or yatula. These are a necessity, as the canoes take on a good deal of water in the moderate to sometimes heavy seas that accompany the prevailing winds favorable to sailing. It takes remarkable skill to bring a canoe through a small opening in the reef when heavy seas are breaking. Here again water is taken on in quantity and the bailers come into action. 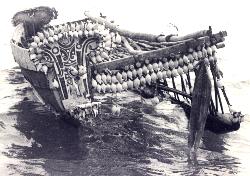 Trobriand paints have a short life and usually are renewed for each Kula trip. The red paint on Karumosa is a natural earth pigment that is traded in Kula from the people of Dobu Island. The traditional value of this pigment in the Kula trade is due to the fact that no earth pigments are found in the Trobriands and other coral islands. The white paints are manufactured by heating sea shells and crushing them into a fine lime powder. The black paint is a mixture of charred coconut husk and banana stalk sap. Most of the canoes being built today make use of European paints.

The caulking or bwadi is made from the inner resinous layer of a swamp tree. To preserve a degree of plasticity the bwadi is daily rubbed down with a seaweed from the shallows whenever the canoe is not stored in a canoe house. Here again European materials are being substituted in the newer canoes. 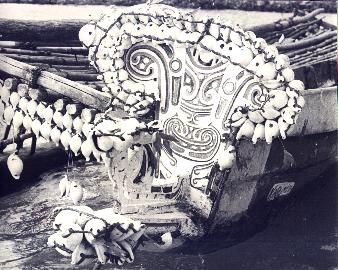 Prow board with asymmetrical splashboard (lagim)

The most distinctive features of the Kula canoes are the carved prow boards. There are four of these, two at each end of the hull.

The large splashboards enclose the ends of the canoe and are known as lagim. The asymmetrical design of the lagim provides a greater overhang on the outrigger giving protection from spray. 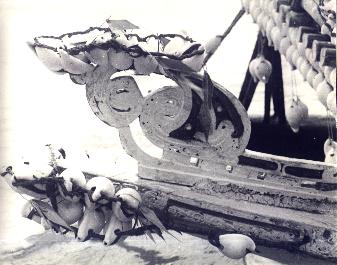 The tabuya or wave-splitter is mortised into the canoe nose and acts as a knee holding the lagim and the sideboards in place. These boards embody the principal art of the canoe, but are strictly functional in their origin.

Artifacts on this site were collected in the field by my husband, Ron Perry. I take the photographs, do the html, text and maps. Background in Who We Are. Art-Pacific has been on the WWW since 1996. We hope you enjoy our New Guinea tribal art and Indonesian folk art as much as we do.