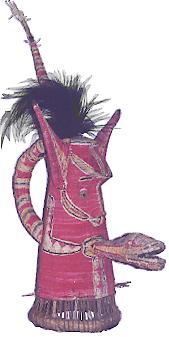 The Sulka create two types of brilliantly colored basketry masks: the large umbrella-shaped hemlaut mask and the cone-based susu mask. Both are constructed with pith woven over rattan basketry frameworks. Their colors are unique in Oceania.

Sulka villages cluster along a narrow strip of coast wedged between the mountainous interior of New Britain and the stony beaches at the south end of Wide Bay (1). Masks are made for initiation ceremonies (boy's circumcision, girl's ear and nose piercing, young men's teeth blackening before marriage), bride price exchanges and mourning ceremonies.

Sulka susu gitvung/nunu mask with snake emerging from its mouth. The striped body of the snake coils up behind the mask. Colors are made from pollens. The hair is cassowary feathers. Photo courtesy of a private collection. For the story of this mask see Sulka dance information. 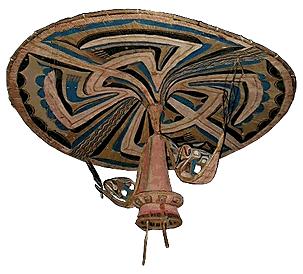 Hemlaut mask with two small figures on the struts. Drawing based on a mask displayed in the Rotterdam Volkart Museum.

Hemlaut masks have cone-shaped bases topped with a large umbrella shape. A cone's design might represent a wild taro, a praying mantis with claws or human-like forms called nunu.

The strong geometric patterns on the underside of the umbrella are called "writing". They may continue the cone's form or represent something else such as wild palm leaves or a crayfish. Patterns may be painted in red, black, pink or green dyes set off by whites.

Before the ceremony, bright parrot feathers are added to accent the rim. The skirt for the mask is usually made of 2 layers of different leaves.

Other types of hemlaut masks have additional extensions tied with shell money traded in from southern New Ireland. One style had two nunu heads under the umbrella and required two dancers.

A hemlaut mask takes months to construct, but its single performance only lasts for minutes. It may be danced 2 ways, each way has its own songs.

Two hemlaut ceremonies are described in Issac and Craig's Sulka masked ceremonies and exchange. In the wedding exchange, the groom's side made two masks, the bride's one. The groom's extra one represented a gift to the bride.

In the second, a hemlaut mask named "Bethlehem" was performed for a Sulka man being inducted into the Franciscan priesthood. The cone base included figures from the Christian Nativity. Since he was to be initiated into the priesthood, married to the church, and also, considered dead to normal community life, the Sulkas considered the ceremony appropriate. 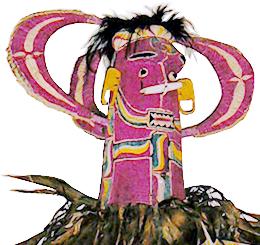 Sulka gitvang susu mask, possibly of the wowoi shell type, with long pierced ear lobes and a nose plug. It has the blackened teeth of young male initiates.

Susu masks have a cone-shaped base. The masks in these photos are basketry forms made with pith, which is light weight, but fragile. Simpler ones are made from a painted cone of tree bark. These bark susu masks are said to come from the neighboring Mengen.

Southern Sulka susu masks topped with wooden faces or figures seem influenced by New Ireland Malagan and Tolai traditions. They may come from the Sulka influenced ceremonies of the Mengen.

Traditional paints are made from brilliant natural dyes and pollens. Decorative geometric patterns catch the eye of audience. Many of the bright colors fade easily, so examples in collections often no longer have the same visual impact as when they were danced.

Different forms are named for shapes such as garden taro (tokati) with the tip cut off ready to be planted, wild taro (kulkan), shellfish (wowoi), birds, human-like forms or "reflections" (nunu) including faces and large male and female figures.

Initiates are called gitvung and this term is also used for some susu masks. Masks often have nose plugs and elongated earlobes in the original style of initiated men. Bulges can represent raised decorative welts from skin cutting. Hair is made from black cassowary feathers. Skirts may be single or double layers of different leaves. Corbin reports that a "tail" of lemon grass and other aromatic leaves was added to attract women.

Susu dancers perform together in a line. The South Australian Museum quotes a susu song which compares the susu dancer to a flower blowing in the wind. The mask is the flower dancing in the sun. The skirt is like the flower's leaves swinging to and fro.

Keipa masks are worn to collect food for the makers of the hemlaut and susu masks. They have simple painted faces and palm-leaf skirts. They ritually whip people who will receive food during exchange ceremonies.

Their neighbors, the Mengen, who live along the coast to the southeast, speak an Austronesian language, as do the Tolai along the north coast near Rabaul. The Mengen have acquired some Sulka ceremonies and masks. These also show influences from New Ireland Malagan ceremonies. The Sulka and the Baining probably were the earlier cultural groups.

Books used to research this series.